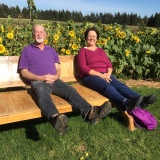 [S]he solemnly celebrates the struggle, often painful, often joyous, to nurture one’s children, protect one’s people, and be part of the renaissance of one’s culture. In “Knit” she writes of unravelling “knots between when we come into this world sacred / and sacred take our leave.” 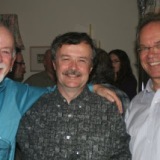 Brian’s knowledge of the natural world, garnered over a lifetime, is exemplary. That knowledge is based mostly in Nova Scotia, but also gathered from his early years in and return visits to his native New Brunswick, and from field trips in Alberta, Nebraska, and Ireland.

Ringing Here & There: A Nature Calendar by Brian Bartlett

Then, on his last day here, another snowstorm struck. This one so severe that our lane was three- and four-feet deep in snow. As the saying goes, “the Island was shut down,” plows too busy with essential roads and parking lots to clear private lanes.